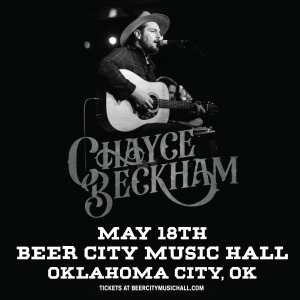 In 2021, Chayce Beckham made his debut as a contestant on American Idol, where he became the first musician to win the coveted prize with an original song – 23. Immediately following his win, Beckham’s song charted, becoming another first in Idol history. Since Idol, the country music star has seen 23 skyrocket to the top of the billboard charts – not only in country music but in all genres. Beckham came back to American Idol this year to kick off season 20, where he performed his latest single, “Doin it Right.”

Life was not always easy before American Idol stardom. Beckham has openly shared the struggles of his journey, battles with alcohol, and how low life can seem. But he persisted, and Beckham left everything behind to pursue his dreams of being a musician. At 25, Chayce has been nothing less than humbled by his success.

On May 18, 2022, Chayce Beckham is coming to OKC, and he will play at the Beer City Music Hall. However, this event is not the only Oklahoma connection, and Chayce has a sister who lives in Shawnee. Tickets for the event are available and can be purchased at https://www.eventim.com/event/chayce-beckham-beer-city-music-hall-15075424/

Learn more about Chayce, his music, and his success at https://www.chaycebeckham.com/