Every Beer has a story: Twisted Spike Brewery

My affinity for Twisted Spike Brewery is no secret. It’s one of those places that seemingly does everything right in my books. Bruce Sanchez has created a brand that is unique and has become synonymous with great beer. They have also built a reputation for being a hospitality-first taproom. When you pull up to Twisted Spike, yes parking can be a little tricky, but it’s worth finding a spot in order to sit at the bar and have a great conversation with one of the friendly staff members and patrons. Sitting right next to a railroad track creates an opportunity for branding, which is where the name came from, after a good amount of researching names and brands. It just so happens that Bruce came across a picture of a twisted railroad spike bottle opener and it was an instant connection, and Twisted Spike Brewing Company was born.

The taproom has a very unique style and creative structure. When you walk in you will see three shipping containers, one of which is the taproom, then the other two are custom refrigerators. The walls are full of local art and stickers and other creative elements that have given the space a fantastic feel with a lot of thought-provoking imagery. The style, service, and amazing beer create one-of-a-kind experiences that keep you coming back. 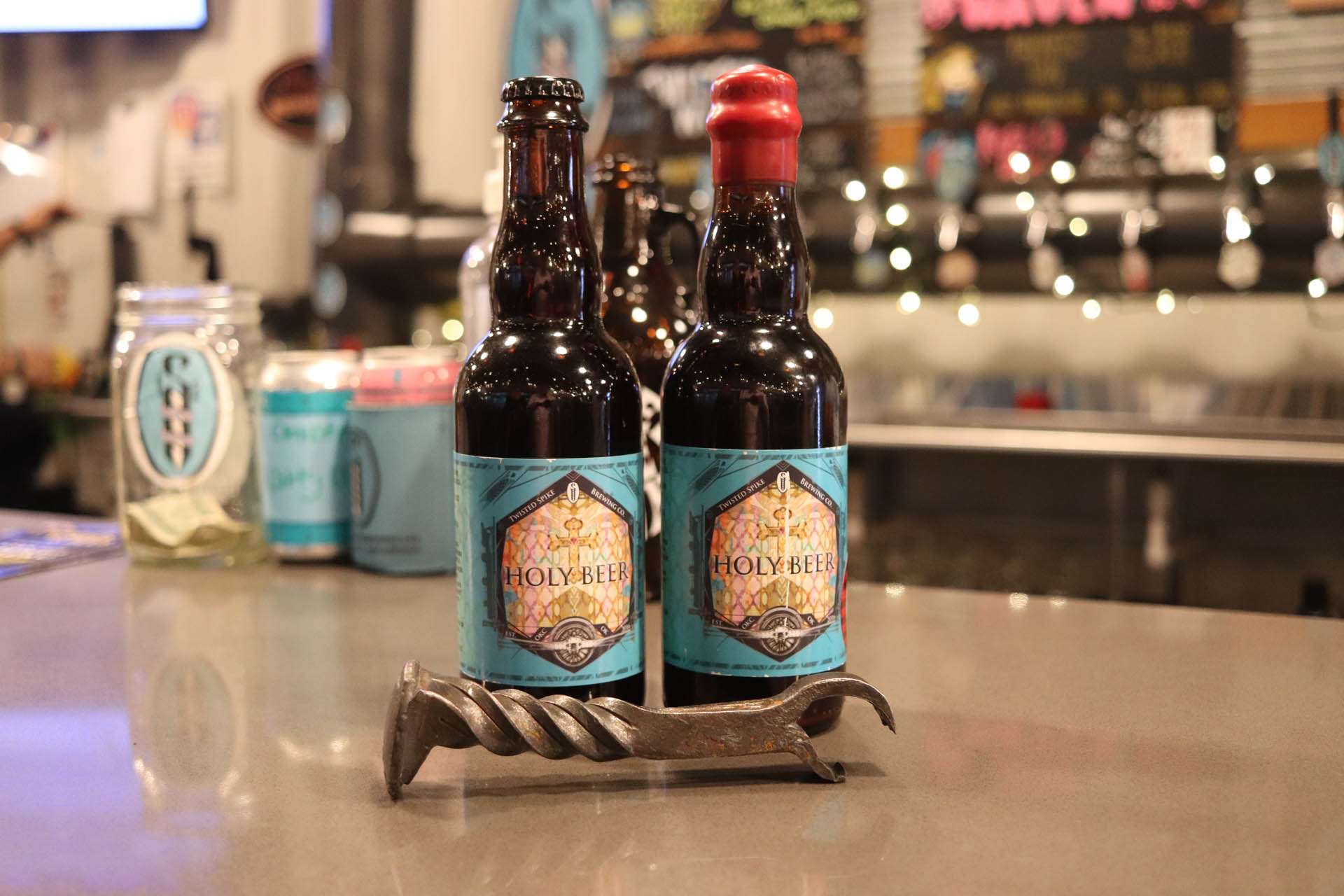 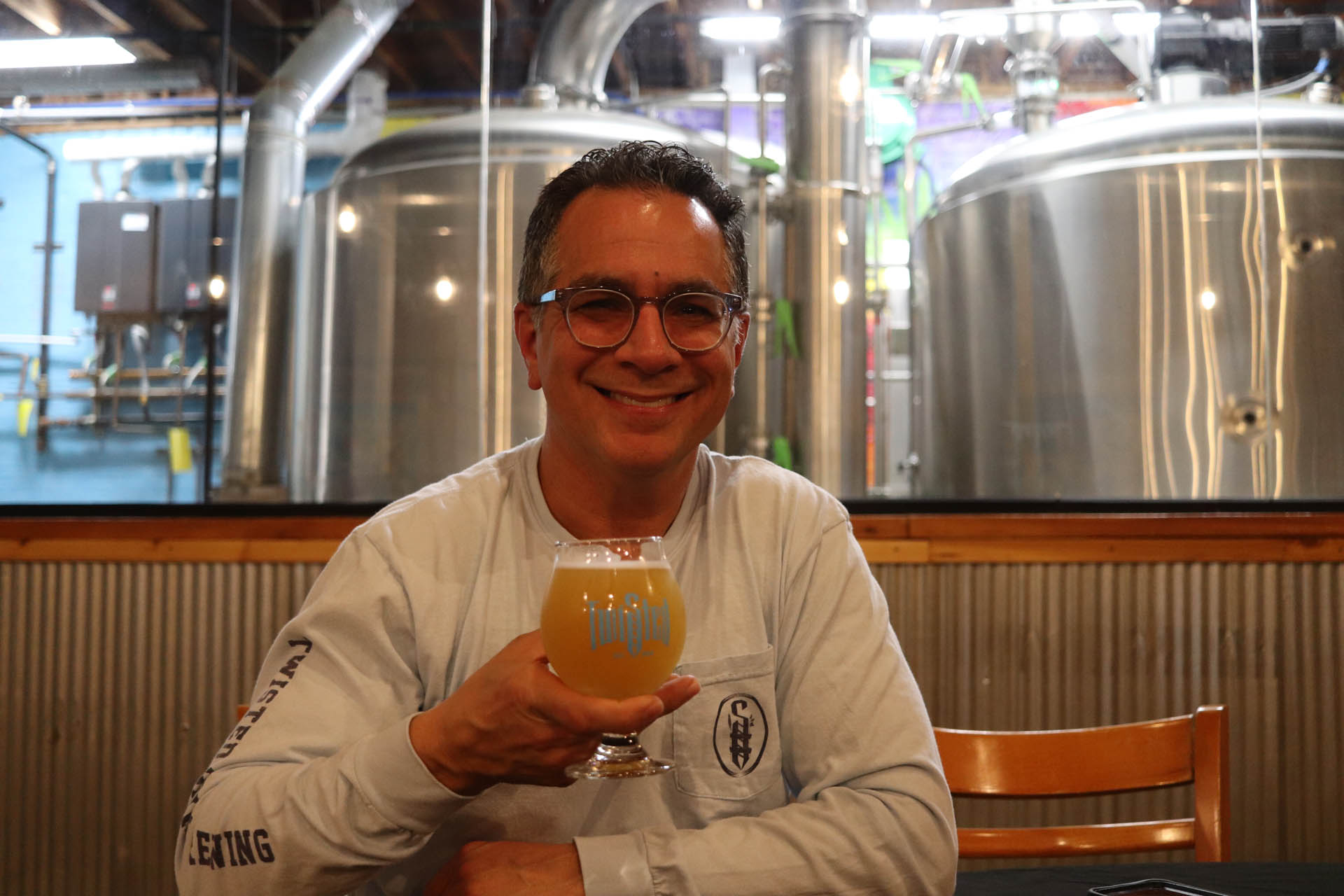 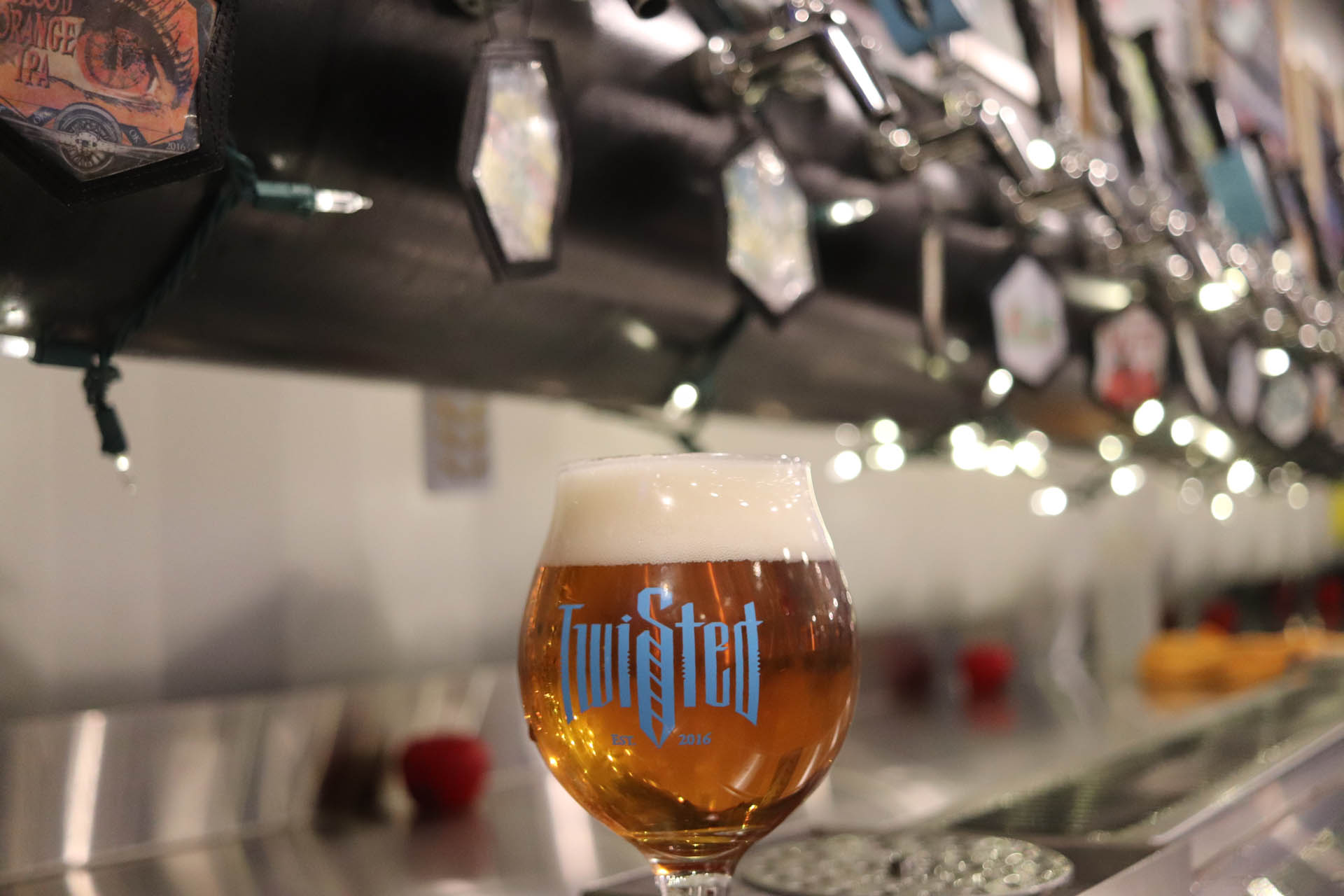 The taproom has a very unique style and creative structure. When you walk in you will see three shipping containers, one of which is the taproom, then the other two are custom refrigerators. The walls are full of local art and stickers and other creative elements that have given the space a fantastic feel with a lot of thought-provoking imagery. The style, service, and amazing beer create one-of-a-kind experiences that keep you coming back.

Bruce is a diehard beer enthusiast, which is what has led to his wide selection of beer styles and ever-evolving beer selections. At the beginning of his beer journey, he started in his garage with a few styles and when he couldn’t drink them all, he would have driveway beer reduction parties for his neighbors and friends. This is probably what accounts for the neighborly atmosphere when you visit Twisted Spike. For years Bruce traveled the Country with work and searched for great craft beer, specifically looking for Belgian beers, as it was something that you just couldn’t find in Oklahoma. As a little tidbit, if you are ever in North Carolina, check the gas stations because they have an amazing selection of craft beers.

When it came time to start the path to building Twisted Spike, Bruce focused on a few key beers that would create the base for the Twisted Spike brand. Obviously, Belgian was going to be at the forefront of the list, with the heavenly Holy Beer that stands up against anything coming out of any monastery in Belgium and is even blessed by a priest before it is brought to your lips. Then you have the amazingly done Russian Imperial Stout, the Black Snake. A Crisp and clean German Kolsch called Crew. An award-winning Belgian Blonde Ale with pear, orange, and clove aromas. An amazingly drinkable West Coast IPA that changed my opinion of IPAs. A smooth and flavorful porter with a robust coffee flavor called Two-Bean or Not Two-Bean. The list goes on, so you will have to come back several times for the Twisted Spike total beer experience of taste, smell, sight, and the feel you get after a few good beers.

One of my favorite features at Twisted Spike is the Blend Board. This is a list of the known blends of Twisted Spike Beers that go really well together. The most well-known of these is the Holy Snake, a blend of the Holy Beer and the Black Snake, creating a smooth, strong, and incredibly tasty life of its own. Trying to list all the options of beers and blends in one story would be a long and arduous process. So, we will just say, go try these beers and blends.

Discussing beer with Bruce is more like an author telling stories of their life. At Twisted Spike, according to Bruce Sanchez “Every beer has a story.” This is so true, from the beginning idea to the development process and onto the naming process and the experience of drinking it. Their story is ever developing by constantly creating new drinkable stories. In the ever-developing story of Twisted Spike, they have recently launched their “Underground” club. An exclusive club to connect the true craft beer fans to a new and exciting experience. This includes members-only beer tap, special releases, members-only events, one-of-a-kind glassware, discounts, and several other amazing perks.

You can’t talk about the taproom at Twisted Spike without talking about Barley & Bees, the new kitchen in the taproom. This menu is perfectly paired with craft beer. A menu of Southern comfort food featuring amazing biscuit sandwiches, like the beer-braised BBQ, pulled pork sandwich that will literally make you smack your mom, so don’t bring her. The loaded Tot nachos are one of my absolute favorite things on the menu. They have several chicken items that defy understanding as o how they are so good. If sweets are on your mind, they have that too like the Strawberry Shorty with fresh strawberries on a next-level biscuit. Bottom line, get to Twisted Spike, have some beer, eat and drink yourself into bliss, and bring a designated driver. 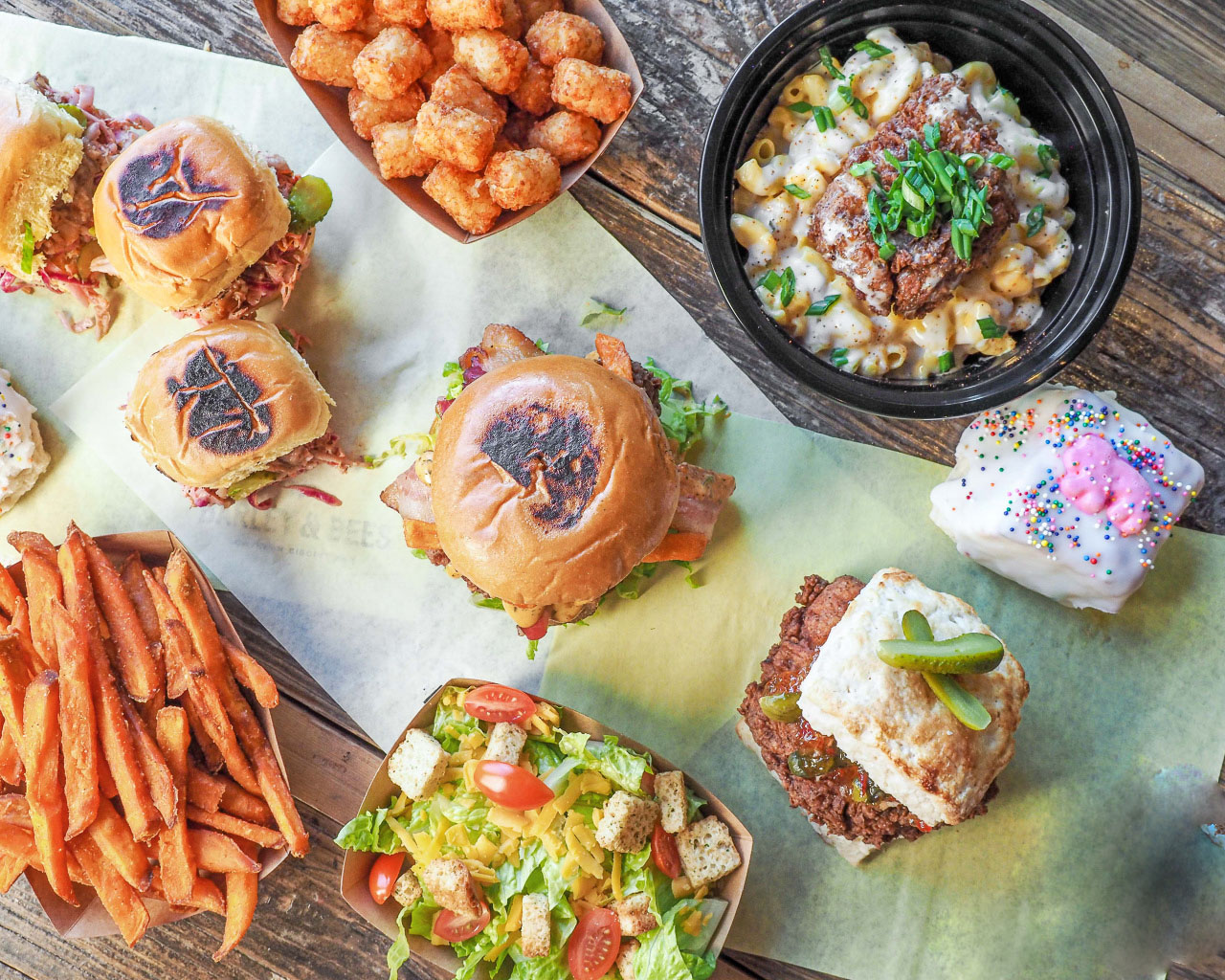 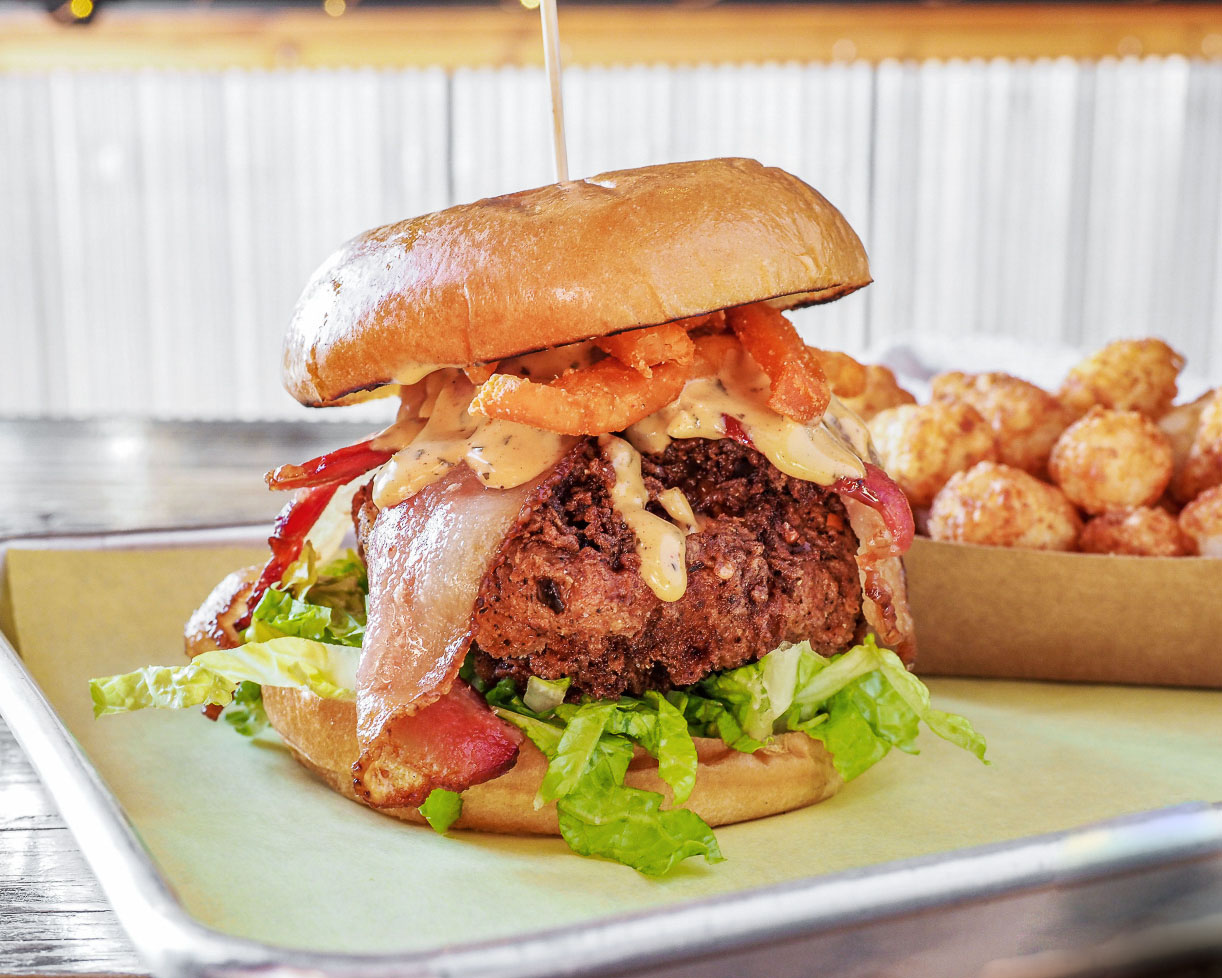 About the Author: James Frazier

James is the co-publisher of The Brew Magazine and Co-owner of OG Media. James has spent years building his skills in the world of marketing and an equal amount of time dedicated to loving food, beer, and craft cocktails. You can find James at a local bar sipping on an old-fashioned or a craft beer while eating amazing food because that's what he does.