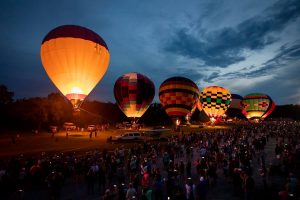 What do a duck, a rooster, and sheep have in common? In 1783, the unlikely trio became the first passengers to ascend in a hot air balloon. The pioneering ride lasted eight minutes and covered approximately two miles before landing safely. The only injury sustained was to the rooster after being kicked by the sheep.

King Louis XVI was intrigued by the idea of traveling in balloons, but he was also concerned about the effects of high altitude on humans. So, the King proposed using prisoners for a series of test flights. Brothers Joseph-Michel and Jacques-Étienne Montgolfier had other ideas, however. Instead, a sheep was chosen due to its physiology being similar to that of humans. A duck was unlikely to sustain harm due to its ability to fly at high altitudes. The rooster, however, was used as a control subject.

Shortly after, chemistry and physics teacher Jean-François Pilâtre de Rozier became the first human to ascend towards the heavens in a tethered balloon that lasted approximately four minutes. About a month later, Jean-François Pilâtre de Rozier and the Marquis d’Arlandes, a French Military officer, became the first human passengers to fly untethered. Their flight took off from the center of Paris, stayed aloft for 25 minutes, and traveled a little over five miles.

“We observed it lift off in the most majestic manner,” said Benjamin Franklin. “When it reached around 250 feet in altitude, the intrepid voyagers lowered their hats to salute the spectators. We could not help feeling a certain mixture of awe and admiration.” 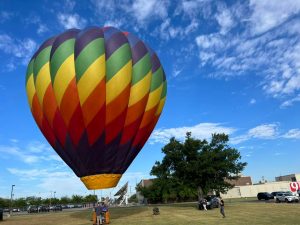 Hot air balloons have not changed much since the 1700s. The first hot air balloons used an open flame to burn materials, and heat would rise into the envelope, which generated lift. Over the years, safer methods to fill the envelope have been used. The most common of which is to heat the air by burning propane.

Interest in the hot air balloon has increased over the last 50 years, and hot air balloon festivals are returning to Oklahoma. The FireLake Fireflight Balloon Festival is the largest and most popular in the state. “The event began in 2017,” said Director of Public Information Jennifer Bell. “We had to cancel in 2020 due to the COVID pandemic, so this will mark our 5th year. The event has grown each year, adding more balloons, attractions, and entertainment.”

Over the two-day event, guests will witness the Shawnee skyline turn into a bright and vibrant mix of colors as hot air balloons launch from the Citizen Potawatomi Nation Pow Wow Grounds. Guests can also take a scenic ride on one of the 20 balloons. However, guests will want to stay late and witness the awe-inspiring balloon glow.

“The purpose of the event is to give back to the community, but also to show what the Tribe and Shawnee have to offer,” said Bell. Adults can explore food trucks while shopping at various craft vendors and learn about the great outdoors at the Outdoor Nation Expo at Fire Lake Arena. Guests will also be thrilled with live entertainment and a hunting and fishing show.

“This year, there will be new attractions in the kid zone – typically, that area is free,” 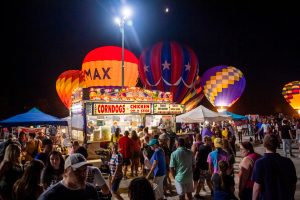 said Bell. “This year, a $10 wrist band (good for the entire event) can be purchased for some of the bigger kid zone attractions. We have music from Bryan White and several other Oklahoma musicians. Weather permitting, we will also have a few more balloons this year.”

This year, the festival will take place from August 12th to the 13th. “This is a great family event,” said Bell. “We encourage people to bring blankets and lawn chairs. There is no outside food or drink. Parking and admission are free, which is nice now given the higher costs for everything.” 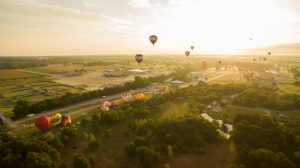 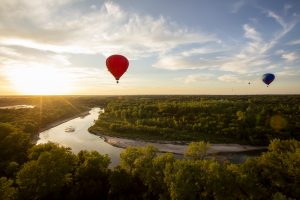