When you need sun and a cocktail: Patios, Rooftops & Pools

Fingers crossed but it looks like we may have finally turned the corner on winter and are looking forward to an especially spry spring. Why not take the opportunity to countdown some of the best places in town to take in the season? That’s right we’re planning a staycation!

The Paseo has for a long time been a great place to find not only great art but also dining and nightlife. Patrons of The Other Room are varied in taste as the bar caters to a variety of scenes. Kick back on the back patio while taking in a cocktail and conversation. What’s great is that not only are there classic drinks at The Other Room, but diners have access to delicious food too provided by Picasso Cafe next door. Order your food at the bar and your plate will be brought right to you. The Vegan Sliders are so satisfying, impossible beef and gooey cheese make these a must-have!

What’s that place in the Plaza District with the ultra-hashtag-able rooftop terrace? That would be Up-Down OKC, the super swank arcade bar where you can try out refreshing themed drinks while button-mashing your favorite old-school videogame. My personal favorite is of course the retro X-Men arcade game. Surveying the sights of the Plaza District by taking in the view from the rooftop? Make sure to snap some great selfies in front of their green wall and neon sign while you are up there. The citrusy Legend of Zelda-inspired Ocarina of Lime is a zesty way to ease into spring that cannot be missed. It’s also the perfect drink for champions that live out their nostalgic hoop dreams playing NBA JAMS. That’s right they’ve got that one too. Also, if you’re peckish pick up a slice of their pizzas. Feel free to chow down on the Mac & Cheese Pizza while kicking keister in Teenage Mutant Ninja Turtles. Cowabunga dude! 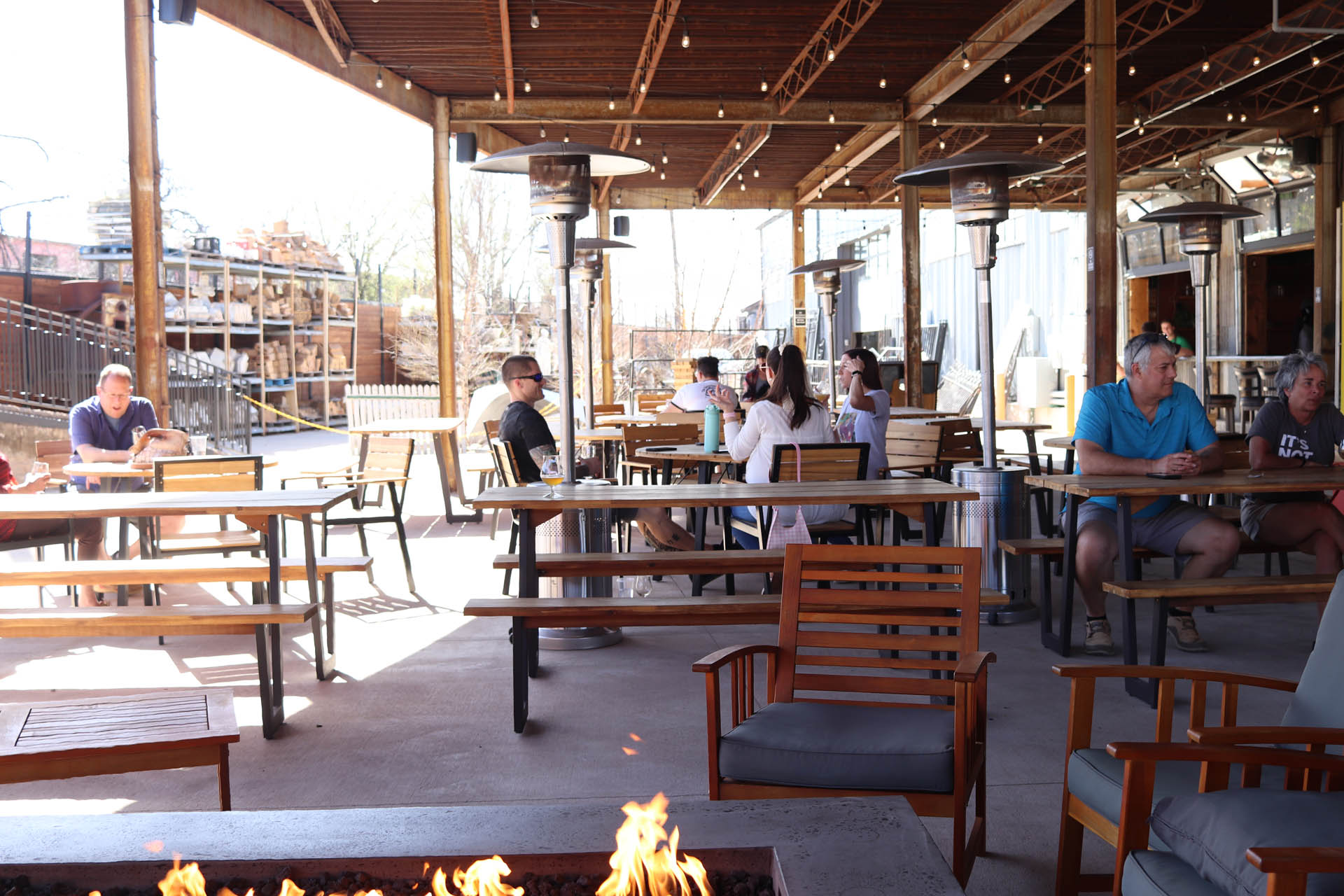 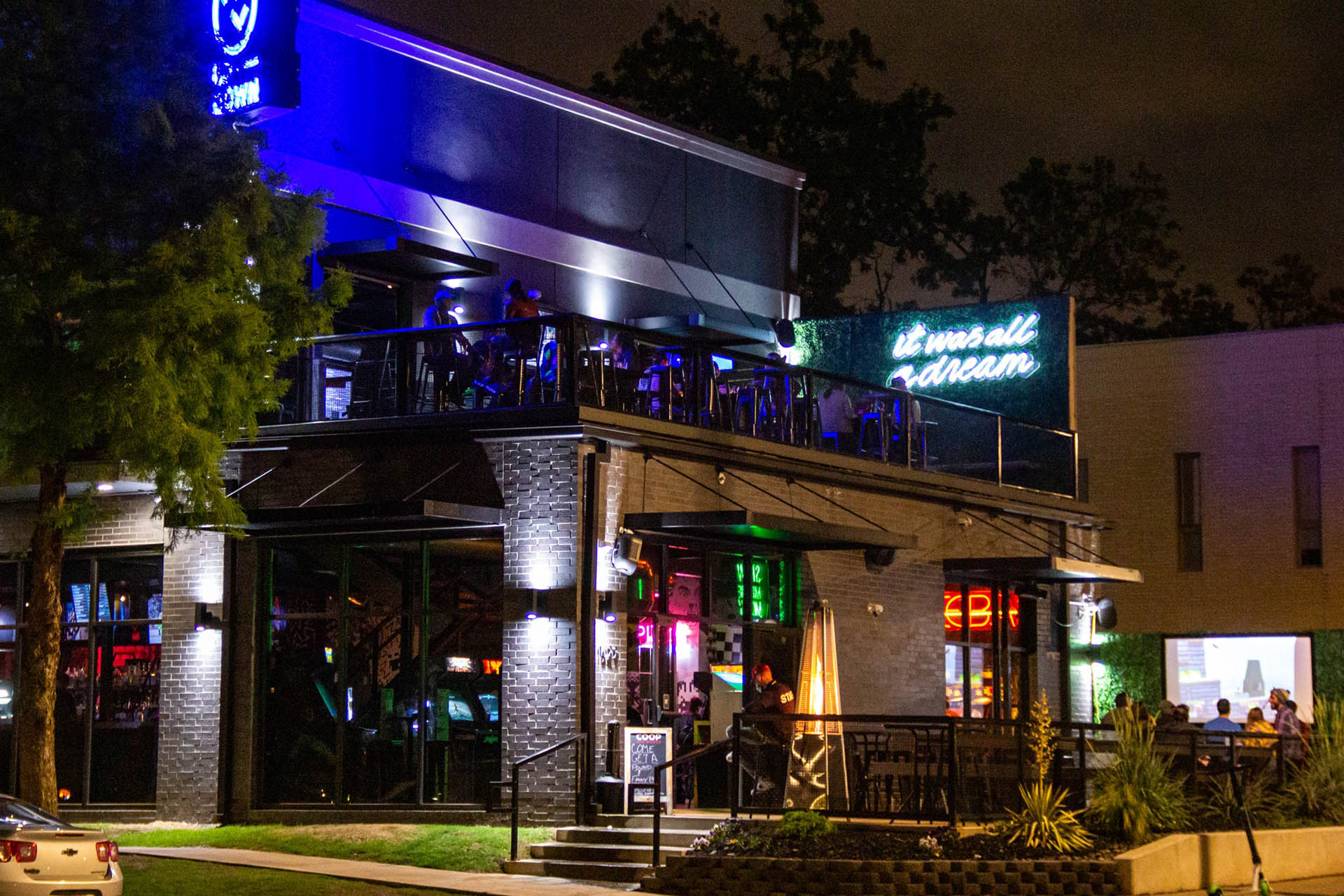 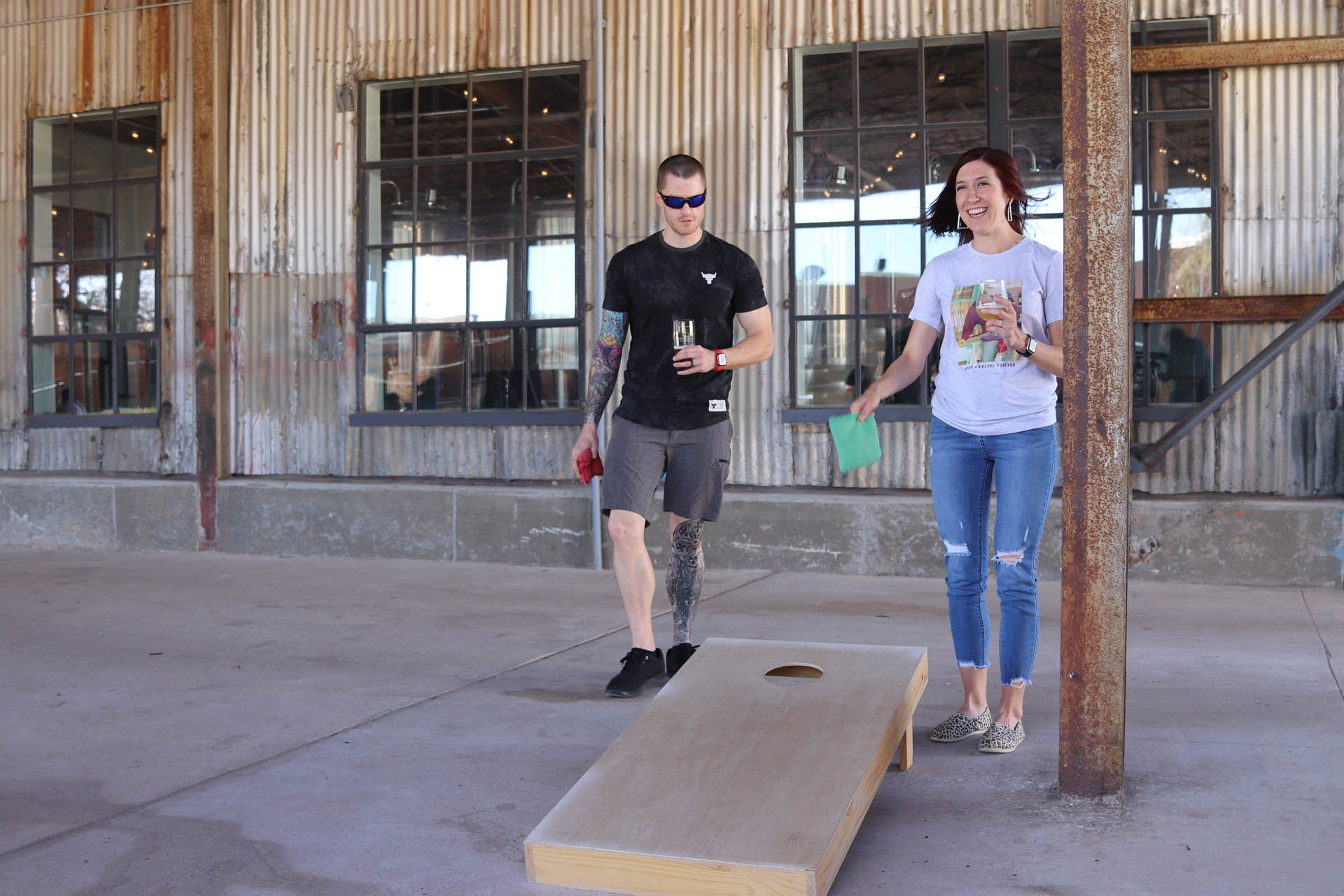 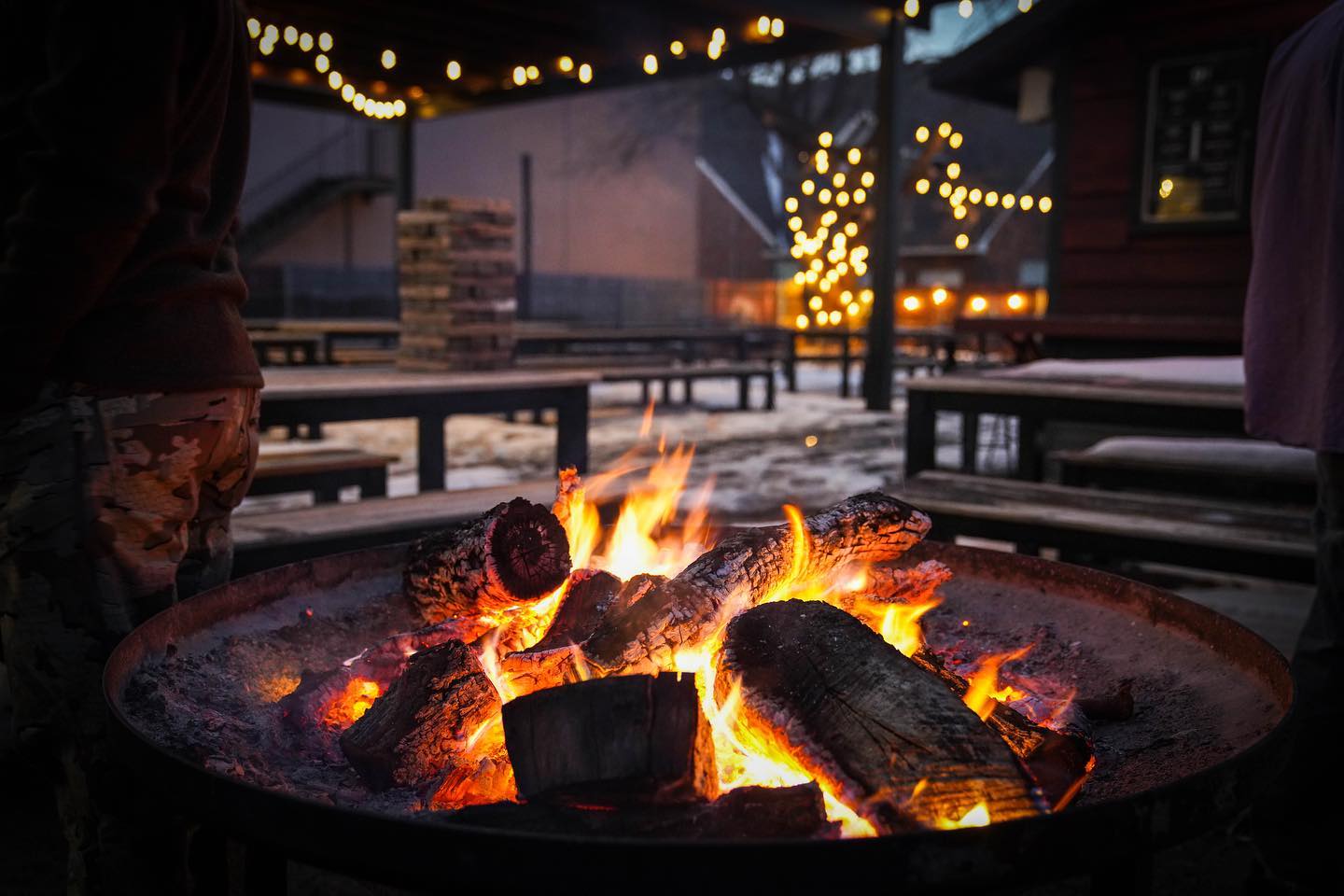 If you have driven down North Walker Avenue in Oklahoma City at any point you would have likely noticed the bright lights and loyal clientele of The Pump Bar. The vintage gas station motif helps to make for a fun low-key atmosphere. The Black Betty is a berry good drink. Blackberry, lemon, and mint combine for a perfect warm-weather cocktail that will have you coming back for more. Have some food to accompany your drink and check out their menu.

Few things outside of sports cause Oklahomans to throw down the gauntlet, barbeque is one of those things. Bedlam BAR-B-Q is a love letter to Oklahoma sports that is written in BBQ sauce. The Pulled Pork at Bedlam is best enjoyed on their scenic patio.

What’s that brewery with the awesome patio and fire pit? As if the exteriors and interiors of Cross Timbers Brewing Co. weren’t enough, they also boast a great selection of beer. Pickles are the perfect way to pucker your pout this summer and how better than with the Bob Dillin’ beer at Cross Timbers. Plus, they have the best beer to kick back with after a long day This Perfect Day.

Dining on Smoked Salmon and Pita, while spending an evening under the stars cozied up to a stylish fire is fantastic. Sidecar Barley & Wine Bar at Chisholm Creek is the place where you can chill with your friends and family or have a date night with the one.

Volare Campus Corner has an incredible view of Norman. Their deck is one of the best places to socialize. Mount Vesuvius is the best of both worlds delicious rigatoni pasta dressed with crunchy pizza crust. Each of their pizzas are made with several different combinations of toppings and cheeses. The Bee Sting pizza is probably not the pizza you are used to and that’s awesome!

The Patriarch Craft beer House & Lawn is just down the street from the University of Central Oklahoma is all about community. The fact that the bar is in a large house that is over one hundred years old adds to the family atmosphere. This is a place where strangers forge lifelong friendships. A great way to make friends at The Patriarch is with mouthwatering food. Why not share some Loaded Fritters or Pork Belly Potato Skins?

A bit of Germany right in Midtown, Fassler Hall has been around for quite a while due in large part to the many regulars that patron it. You will often find friendly groups enjoying some beers and games on their awesome cement patio. It wouldn’t be a German restaurant without some succulent sausages. Up for order are classics like Bratwurst and Cheddarwurst as well as tastes more unique. Totally at home in Oklahoma is the Hunter it is made up of venison, pork, and bison meat. Beer is the drink of choice at Fassler Hall. Of the German variety, there are Ayinger Celebrator, Schneider Eisbock, and Paulaner Oktoberfest. Fassler also makes sure to highlight some of the local beer selection as well, they carry Coop DNR and Prairie Bomb.

If you have been to Yukon recently you probably know that everyone loves talking about the Fried Deviled Eggs at The Lokal. Follow those up with The Lokal Club layers of Black Forest ham, pastrami, and turkey bacon.

Grady’s 66 Pub hosts many live performances throughout the year. Co-owner Grady Cross himself was an original Cross Canadian Ragweed member. Good drinks go hand in hand with live music. In addition to their beer selection, mixed drinks like Grady’s STD Shot have developed their own followings.

Formerly known as the Habana Inn the District Hotel is the perfect place for those twenty-one and over to hang poolside going into summer. It is the watering hole to see and be seen. Simply purchase a pool pass at the hotel’s front desk for $10 and join the festivities. Flashy and colorful surroundings match the exuberant swimmers and sunbathers dotted around the pool’s rim. The poolside DJ spins all the hottest up-tempo hits you need while the cabana bartenders keep the drinks flowing. As a longstanding feature of Oklahoma City’s LGBT community, The District is an oasis that celebrates difference as evidenced by the vivid murals decorating the property and the dynamic programming it hosts.

About the Author: Xavier Jackson

Born and raised in Oklahoma City, Xavier received his bachelor’s degree in Journalism with minors in Media Studies and Theatre in 2014. Xavier is an active member of the Oklahoma City community with memberships in several civic groups and consistent volunteer work. In his free time, Xavier loves spending time exploring different cultures and foods. He is passionate about the beautiful diversity of OKC.